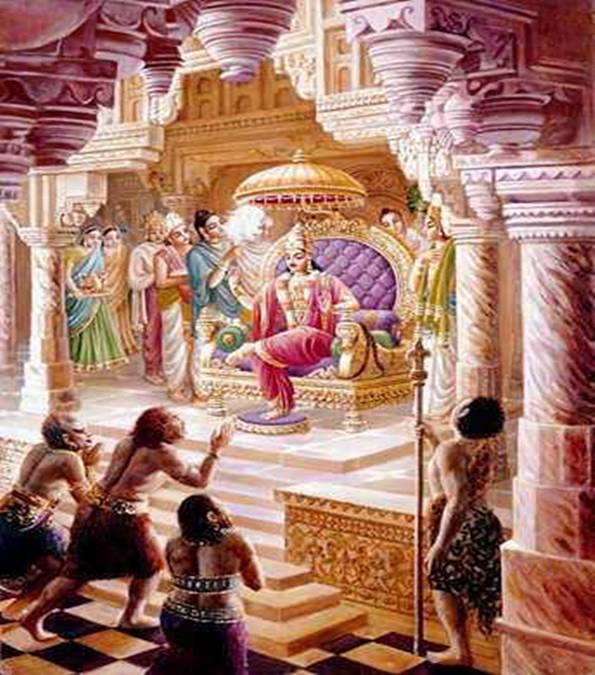 Once there was a king who distributed food and dakshina every morning to the Brahmanas (priests) on pilgrimage visiting his court.

One day, as he was giving out food to the priests, an eagle flew above holding a dead snake in his claws. Out of the mouth of the dead snake fell a drop of poison into the food that the king was distributing.

No one knew or saw this had happened, so the king continued distributing the food.

The Brahmana who accidentally got the poisoned food from the king died. The king felt very sad about it.

One of the servants of Yamaraj (the god of death) whose duty was to distribute karma to the living beings was faced with a problem. On this occasion of the poisoned food given out by the king, he did not know who to give the karma (of causing the Brahmana’s death). His rule-book was silent on eventualities of this kind.

While the Yamadhoota (the servant of Yamaraj) stood vexed, on the following day, a fresh batch of Brahmanas on pilgrimage headed towards the king‘s court.

On the way they asked a lady for directions to the king’s palace. Pointing to the right direction she cautioned: ‘But, be very careful, the king is known to kill brahmanas!”

The moment the lady faulted the king, the Yamadhoota was immediately relieved. Now he knew he had a rule in his book for the intractable problem on hand.

He gave her the karma of brahmana’s death.

That was for making unjust and untrue allegations against the king.